Could Global Milk Prices Be Rising?

Global milk supply is expected to grow by 1.5 per cent this year, while demand growth is expected to exceed the rise in supplies according to researchers at the International Farm Comparison Network.

This in turn could lead to a change of fortunes for global dairy farmers with farm gate prices rising.

The slowdown in the growth of milk supply is a reflection of the difficult state of the global milk market which is experiencing continuing low prices.

According to the IFCN research team, a drop in the local milk market price happens more rapidly in open markets than in regulated markets.

Speaking at the recent IFCN Dairy Conference, Torsten Hemme, Managing Director of IFCN said: “For more than 14 months, the world has been facing a dairy economic crisis, where farm prices are 10 per cent or more below the average margin. This came about from the dairy crisis in 2012 among other things and the dairy price boom of 2013 and 2014.”

Farms are surviving by adjusting their cash flow and hedging their inventories, such as cattle and feed.

Mr Hemme said that very often maintenance and investment are put off to buffer the negative income on the farms.

“Farms are small operations and they are now starting to look for risk management tools, to diversify the risks. We have to follow and support this development,” said Anders Fagerberg, chairman of the IFCN Board during a conference workshop.

The current drop in the growth of supply is also being influenced by demand, which the IFCN estimated was 1.8 to two per cent down in 2015. The average growth in demand for the decade between 2006 and 2015 was 2.4 per cent a year.

IFCN estimates milk demand growth at two per cent this year, which means that while growth has slowed below demand this year, the growth of supply over demand in previous years has seen a surplus in stocks.

This year demand is expected to exceed supply, which could have repercussions for prices, but according to Mr Hemme, this will all depend on how the dairy stock holders handle the current milk stocks, but he said that a price recovery is possible later this year.

Global milk supply is dominated by the top 20 companies that collect 200 million tonnes of milk more than a quarter of the total global production.

Farmers of America leads the IFCN Top 20 Milk Processors list with a milk intake of 28.1 million tonnes in 2015.

The international giants Müller and Arla increased its intake by between 1.7 and 2 million tonnes raising them up the top 20.

The German processor DMK also rose in the rankings through the acquisition of the Dutch DOC Kaas and adding 1 million tonnes to its milk intake.

Agropur and Schreiber Foods, both in the North American market are newcomers to the rankings.

Amul from India and Yili and Mengniu from China collecting together 19.1 million tonnes of milk, nearly 10 per cent of the milk in the top 20 processors.

Turn-over per kg of processed milk ranges between US$0.5-2.4 per kg in 2015, whereas Nestlé and Danone were ranked highest and DFA and California Dairies were ranked lowest. 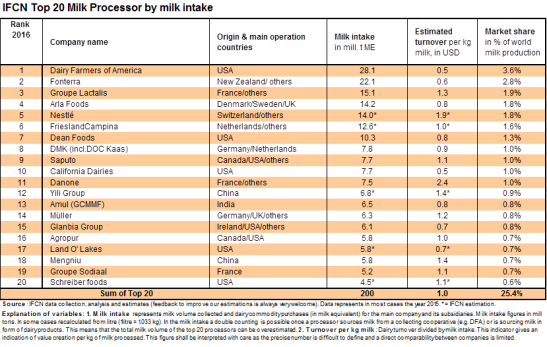 This entry was posted on June 15, 2016 by agedchrisharris in Cattle, Uncategorized and tagged companies, Dairy, global, Markets, trade.