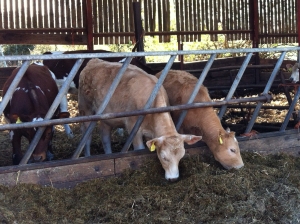 Antimicrobial resistance in both animals and humans is growing across Europe.

A new report from the European Food Safety Authority shows that bacteria in humans, food and animals continue to show resistance to the most widely used antimicrobials.

Now, scientists are warning that resistance to ciprofloxacin, an antimicrobial that is critically important for the treatment of human infections, is very high in Campylobacter, reducing the options for effective treatment of severe foodborne infections.

In a separate scientific report, EFSA has shown that E.coli resistant to the antibiotic Colistin is connected to the presence of the Mannose Receptor, C Type 1, (mcr-1) gene

The findings of the latest annual Europe-wide report by EFSA and the European Centre for Disease Prevention and Control (ECDC) underline again that antimicrobial resistance poses a serious risk to human and animal health.

This risk was identified by the Commission as a major priority in its political agenda on food safety.

Vytenis Andriukaitis, EU Commissioner for Health and Food Safety, said: “Every year in the EU, infections caused by antimicrobial resistance lead to about 25,000 deaths – but the threat is not confined to Europe. This is a global problem that requires a global solution.

“The EU has long been at the forefront in the fight against antimicrobial resistance and is a leader in the field. Our agencies EFSA and ECDC, by combining their expertise in human and animal health, are putting together many of the pieces in this complex puzzle and providing policy makers the world over with valuable scientific advice.”

The report also found evidence of resistance to the antimicrobial colistin in Salmonella and E. coli among poultry in the EU.

Mike Catchpole, Chief Scientist for ECDC, said: “This is worrying because it means that this last-resort drug may soon no longer be effective for treating severe human infections with Salmonella.”

In addition to the high levels of resistance shown throughout Europe, the report found that there are significant regional differences. The highest levels of antimicrobial resistance (AMR) are observed in eastern and southern Europe. Marta Hugas, Head of EFSA’s Biological Hazards and Contaminants unit, said: “In northern Europe, there is lower resistance in bacteria from poultry, particularly in countries with low use of antimicrobials in animals.”

In the scientific study, Prevalence Of mcr-1 In Commensal Escherichia Coli From French Livestock, 2007 To 2014 by A Perrin-Guyomard, M Brunea, P Houée, K Deleurme, P Legrandois, C Poirier, C Soumet, P Sanders from ANSES, Laboratoire de Fougères, Fougères in France, the researchers looked at 1,696 isolates collected from 2007 to 2014 within the frame of the French livestock antimicrobial resistance surveillance programme.

The mcr-1 gene was detected in all commensal Escherichia coli isolates with a minimum inhibitory concentration to colistin above the 2 mg/L cut-off value (n=23).

These findings support that mcr-1 has spread in French livestock.

For decades, colistin has been widely used in veterinary medicine against infections caused by Enterobacteriaceae in food-producing animals in Europe. To offset limited data on colistin resistance in European livestock, this antibiotic was added in 2014 to the antimicrobial substances required to be tested under antimicrobial resistance programmes conducted by European Member States.

In spite of this, before 2015, the mechanism of resistance to colistin was only known to involve chromosomal mutations, and so its spread was expected to be limited to vertical transmission.

In 2015 however, the first plasmid-mediated colistin resistance involving the mrc-1 gene was discovered in China by Liu et al.

The study concludes: “The presence of co-resistances in strains harbouring the mcr-1 gene could have contributed to select and enhance the rapid dissemination of the plasmid-mediated resistance to colistin jointly with antibiotic pressure by other antimicrobial use in food producing animals.

“The dissemination of mcr-1 in French livestock, either in a pathogenic or healthy context, raises the question of colistin use in animals”

The study adds: “Colistin use should be now revisited in a double perspective: first, in a veterinary medicine perspective, that might suddenly start to face treatment failures in animal digestive disorders such as colibacillosis or salmonellosis; and second, in a human medicine perspective, in order to maintain the efficacy of a last-resort therapeutic option to counteract multidrug-resistant bacterial infections.”

Resistance to widely used antimicrobials was commonly detected in Salmonella from humans (tetracyclines 30 per cent, sulphonamides 28.2 per cent, ampicillin 28.2 per cent) and poultry.

The occurrence of extended spectrum beta-lactamase (ESBL) was observed at low levels in Salmonella from poultry.

The European Union summary report on antimicrobial resistance in zoonotic and indicator bacteria from humans, animals and food in 2014